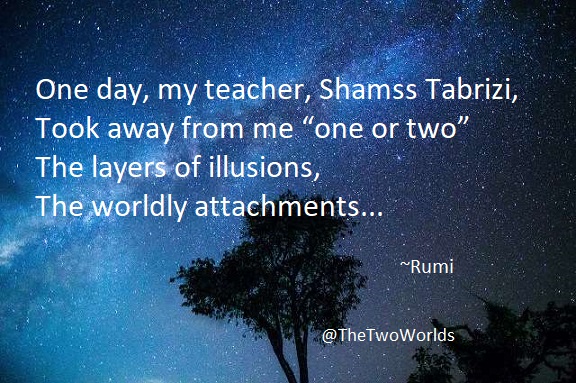 The difference between knowledge and wisdom is;
for the former, you gain every day
and for the latter you lose till you become liberated.

Rumi’s poetry in the original language, Persian, is even more beautiful than its translated ones. But apart from its harmony and musical tone, the couplets in the ode open one after another, like petals of a flower and at the same time carry a sea of meaning. At the Min:7:00 in the video, the vocalist with her capability and skill sings “Shabi berboud nagah Shamss e Tabriz zeman yekta do taie , man che danam”; meaning once Shamss Tabrizi (his mentor) robbed or took away from me “one or two”.  In many interpretations for this couplet, you may notice that the “one or two” is equated to “duality” which is of course a delusional obstacle in seeing the truth of the reality we perceive in our world, however, my interpretation is a bit different:
One day my teacher Shamss Tabrizi robbed me; he stole some stuff from me; he took away from me “one or two”. Here, Rumi is depicting a scene: those who have the bitter experience of being robbed and whose house, car or place has ever been looted by a thief, probably, know that when they arrive at the scene, be it their home for example, they see one thing had been stolen in one room and another thing was missing in the other room… It is probably a devastating scene; very sad indeed; however; For Rumi, the very act of his master stealing from his disciple was not a loss at all; it was nothing but grace and blessings.

The difference between knowledge and wisdom is;
for the former, you gain every day
and for the latter you lose till you become liberated.

Let us see what did Rumi’s mentor take away from him? Well; “One or two” indeed; one or two things that the master identified as obstacles in the path of self-liberation; worldly attachments, social identifications, social status and power, ego, arrogance, craving, longing, never-ending desires and fear of losing; All these taken away from Rumi, were nothing but layers of illusions and personality, socially built during a life time of interaction with environment and society; these mental layers are veiling the true and peaceful nature and the pure essence of man; a heavy load indeed was taken off Rumi’s shoulders. Now Rumi is lighter; he is awakened and he is on his way to enlightenment and liberation; he is reborn again, like a little child, without a mask of personality; in fact “persona” in Latin means “mask”; it was a mask used by the players of theaters in ancient Greece.
When watching Rumi’s poetry in today’s music, always one of my imaginations is how it would have been like if Rumi himself was present in the audience and could see the beauty of the legacy he left for us.
This video music is a collaboration of beauty and competency; the ode itself, the music composition; the vocal and the entire performance.