The Vastness of the Universe and its messages to us.

In starry night, look into the  sky and stare at the smallest dark patch of space which you can find between two or three stars; maybe with the size of 1/4th of the surface of the moon. You see nothing, no light at all. Well you may think that there is no star in and through that dark space. But this is not simply the fact. Let us suppose it was possible that you could travel with a spaceship directly from where you are standing on earth, toward that small patch of space. You would pass through it and continue traveling along, out of our galaxy Milky Way to the edge of the observable universe. During such a long journey you would see, pass beside or go through another 3000 galaxies each about the same size of our galaxy Milky Way with hundreds of billion stars like our sun; how many planet like earth you would see would be unimaginable.

As a fraction of Hubble’s capabilities and achievements in space discovery, it is a good idea to mention an observation known as the Hubble Deep Field.
In 1995 scientists decided to use the Hubble telescope to stare at a small dark patch of space. This tiny area was chosen because nothing was observed in its absolute darkness. They had Hubble pointed at this patch for ten days, taking a few hundred exposures, and they astonishingly found approximately 3000 galaxies in the images taken from a tiny patch of virtually “nothing.” Through two more observations known as Hubble Ultra Field in 2004 and Hubble Extreme Deep Field in 2012 from different patches of sky even more galaxies were found. Through these observations, the number of galaxies in the observable universe was estimated at 100 to 200 billion, but now due to some scientific measurement, scientists believe these numbers to be up to ten times more.”
Chapter 12 | the Macroscopic World – “The Two Worlds”

To have the knowledge of the vastness of the universe helps us to realize our real place in this universe. 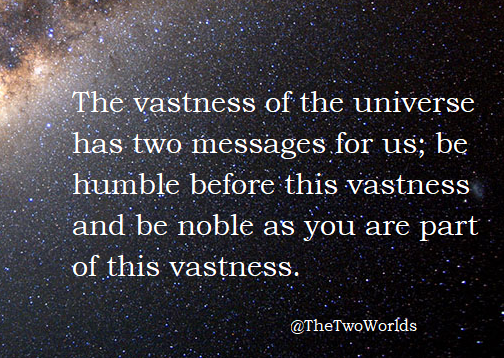 This vastness certainly has some messages for us, humans.  Perhaps, the most important one is: Be humble before this vastness”. Do not only see yourself. Do not inflict suffering on your fellow man; that humans and their life time is short and insignificant in this universe; and finally, the fact that instead of immersing in worldly affairs and its associated negative emotions, to contemplate this vastness and its mysterious structure; a structure of particles, light and love.

“Every particle in the universe is intoxicated with love”